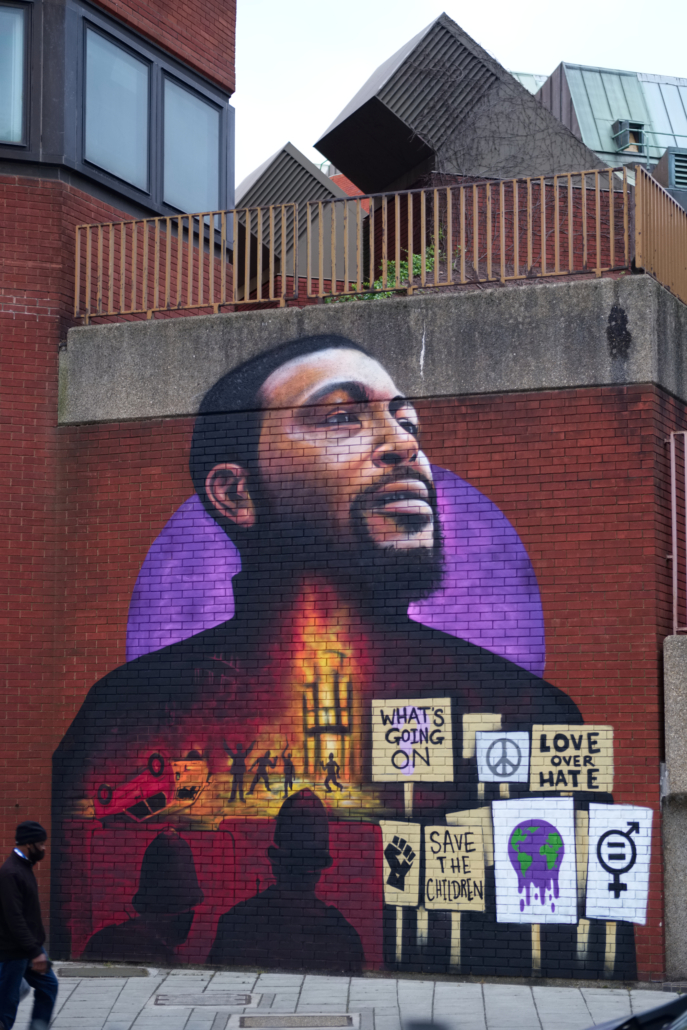 Painted for the 50th anniversary of Marvin Gaye’s timeless album What’s Going On. As part of the global celebrations I was commissioned by Universal Music Group to make some work in response to the album.

The influence and meaning behind one of R&B’s first seamless concept albums, continues to ring true. Calling out to a broken country, Gaye searched for reason and hope in a world that felt desperate and senseless. He opened the door musically, culturally, and politically for countless musicians over the last five decades to address, with a vulnerable depth and complexity, the injustices of our world. The mural touches on past and contemporary societal issues. The picket signs are in reference to the lyrics from the title track and words taken from song titles of the album. The symbols on them represent contemporary movements campaigning to address the climate crisis, gender inequality and world peace.

The left side of the mural is in reference to the Brixton Uprising of 1981 that sees It’s 40th anniversary this year. The uprising was a watershed moment for race relations in the UK. The Mural is located a stones throw from Brixton police station (no pun intended ; )

It was an honour to make artwork in celebration of such an iconic album, from such a legendary artist. It is disappointing though, that many of the lyrics of the album are still so pertinent. This painting for me is a recognition of today, with hope for a better tomorrow

The Guardian
Scroll to top