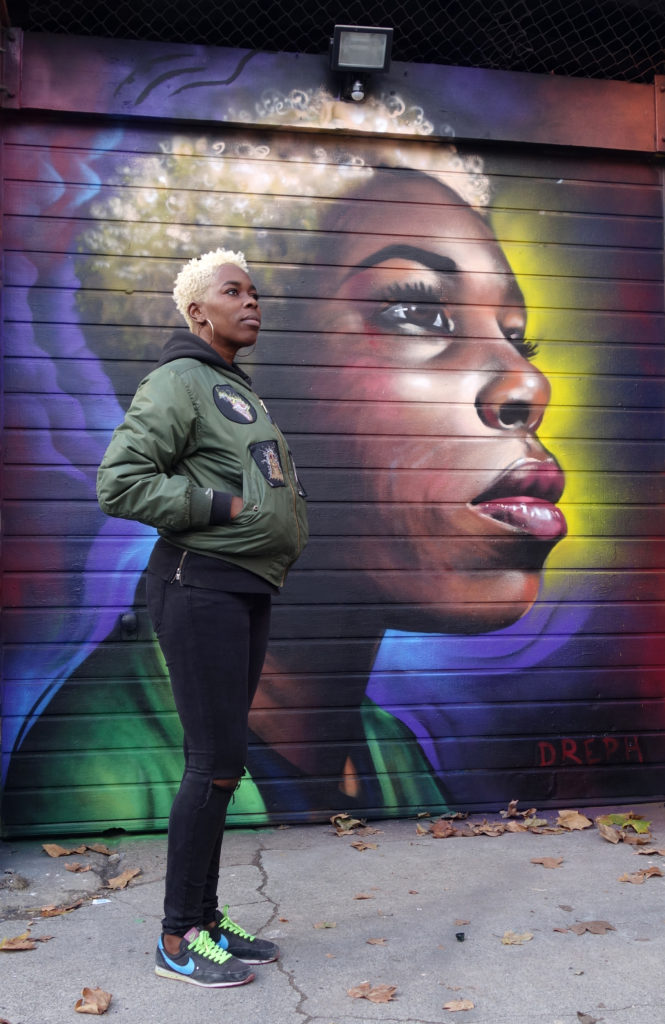 The first subject in my current artists series is of the talented @carleendesozer. I first met Carleen about 18yrs ago when she blagged a graffiti job with Haringey arts council. They didn’t know that she couldn’t write Graff to save her life but as she says ‘Dreph was the legit graffiti writer they had also hired. So he taught me how to write and my cover was never blown.’ An that’s what I admire bout this gifted, resourceful and tenacious artist.

In 2000 she started selling paintings at Portobello Market after leaving her day job. This venture evolved into painting on clothing and making accesories. She became known in Portobello as the afro lady cause she would slap an afro character on everything…lol. This is where things really took off as there were few people painting black figures on clothing back then. After 4 years she briefly opened up a clothing boutique in Stratford, again using fashion as a vehicle to sell her work. After a brief spell in the TV industry she took time out in LA in 2004. There she continued making work and on her return decided to focus on improving her airbrushing skills. By 2005 she was airbrushing all over London and after a couple of years decided to really focus on developing her career. Her influences are Hip Hop culture, magazines and fashion, Airbrush art.. think LL Cool J’s jacket in ‘Round the way girl’, American comics, photography and fairground art. I reconnected with Carleen about a year ago and had seen the few bits and pieces she had produced up to that point. She told me that she was intending to paint more on the street. One year later it’s pretty amazing to see the quality, scale and ideas in the paintings that she is producing. In such a short space of time she has inspired so many. From tattooing to large scale murals, logos and Cd covers, Carleen thrives on the challenge of trying her hand at new media. She draws from her imagination and when asked what motivates her, her response was ‘Rebellion.…My mother told me I would never be successful drawing black people’